Helen Lamont, William Marton and Samuel Shipley
Office of the Assistant Secretary for Planning and Evaluation

Long-term care (LTC) is a range of services and supports to meet personal care needs. Most LTC is not medical care, but rather assistance with the basic personal tasks of everyday life, such as eating, dressing, and bathing (Congressional Budget Office, 2013). In 2011, 5.7 million people--about 16 percent of the elderly Medicare population --needed assistance with LTC according to a widely-used definition established by the Health Insurance Portability and Accountability Act of 1996 (Drabek & Marton, 2015). LTC can be very expensive, and Medicare and most private health insurance plans do not cover these costs. In 2014, nationally, the median cost of a semi-private room in a nursing home was $77,380 per year and the median cost of home health aide care was $20 per hour (Genworth Financial, 2014).

With the aging of the population and growing demand for LTC, it is important that Americans take steps toward preparing for LTC, both individually and as a society. This Research Brief summarizes findings from the 2014 Survey of Long-Term Care Awareness and Planning with the goal of contributing to our understanding of the concerns of people, plans to address needs, and preferences about different aspects of LTC insurance and financing.

In 2014, the U.S. Department of Health and Human Services, Office of the Assistant Secretary for Planning and Evaluation contracted with RTI International and GfK Research to develop and field a Survey of Long-Term Care Awareness and Planning. A nationally representative sample of 15,298 non-institutionalized United States adults 40-70 years old completed the survey.

Respondents were asked to complete:

FIGURE 1. Willingness to Take Specific Actions in the Event of a Disability
(N=15,298) 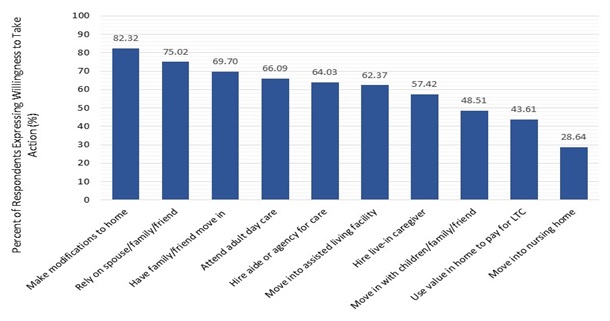 SOURCE: RTI analysis of the 2014 ASPE Survey of Long-Term Care Awareness and Planning.
NOTES: Percentages are shares of respondents who reported being "very"/"somewhat" willing to take an individual action.

The Deductible Period refers to the period during which you have to pay for care out of pocket before you are eligible to receive benefits from insurance. Sponsorship refers to what entity will offer the insurance--with the DCE, respondents were asked to choose between policies offered by private companies or the Federal Government. Finally, for Required Enrollment, respondents were asked if they prefer insurance to be Voluntary, that is you may buy the policy if you like, but you do not have to, or Universal, where everyone is required by law to purchase the insurance.

Figure 2 displays respondents' relative preferences for features of the hypothetical policies. The estimates in this table are scaled to show respondents' relative preferences among the various insurance attributes, with 10 being the highest (most desired) and 0 being the lowest (least desired). Figure 2 also shows the relative importance of these attributes across their full range. Specifically, those with the largest range (i.e., premium cost) were the most important overall in determining choice behavior, and those with the smallest range (i.e., deductible levels or sponsorship) were least important. A 5 in this table represents an average of all the features, so larger deviations from 5 indicate more importance--desirable above 5 and undesirable below 5. 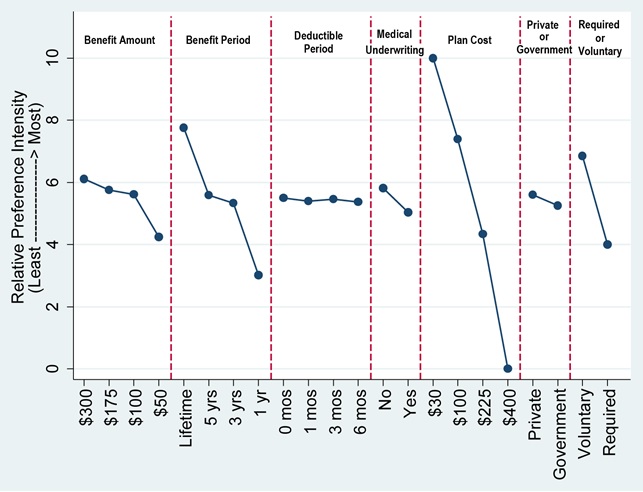 SOURCE: RTI International analysis of the 2014 ASPE Survey of Long-Term Care Awareness and Planning.
NOTES: Figure depicts results, rescaled in terms of relative importance to each other, 0 = least preferred, 10 = most preferred.

Analysis of the Survey of Long-Term Care Awareness and Planning indicates that knowledge of LTC is low among the general population aged 40-70: most were not well-informed about LTC costs, the role of Medicaid, or nursing home length of stay. Respondents expressed a wide variety of concerns related to aging and disability with losing independence being the top concern. When asked what they would be willing to do if disabled, many said make modifications to homes; rely on a spouse, family/friend; or have family or a friend move in with them. However, a majority said they would not move in with family/friends, use the value in their home to pay for LTC, or use nursing home care. Respondent's opinion on the use of home equity may reflect the important role homes have in American culture and may reflect a desire either to leave an inheritance for their families or to preserve their major asset for some other adverse event.

In general, and when responding to the survey questionnaire, respondents favored individual responsibility over government responsibility for LTC financing. Moreover, respondents generally favored voluntary initiatives, both private and public, although they had a stronger preference for private LTC insurance. Mandatory public LTC insurance did not garner much support. Respondents also voiced substantial mistrust of how the government would manage a public LTC insurance program. However, when given an actual choice between hypothetical LTC insurance policies, respondents tended to focus almost exclusively on price, the length of coverage, and to a lesser extent, the daily benefit amount of the policies. Respondents had a preference for voluntary insurance, but not as highly as their preference for low price and extensive coverage. Compared to these preferences, respondents were much less concerned about the deductible period, medical underwriting, or sponsorship of the plan--whether by the government or private sector. Given the somewhat conflicting views of the public, the challenge for policymakers is to find a reform strategy that will both successfully address the problems of the LTC system and have broad political support.

This Research Brief was authored by Joshua M. Wiener, Galina Khatutsky, Nga Thach, Angela M. Greene and Benjamin Allaire (RTI International); Derek Brown (Washington University); and Helen Lamont, William Marton and Samuel Shipley (Department of Health and Human Services). It summarizes findings from the 2014 Survey of Long-Term Care Awareness and Planning with the goal of contributing to our understanding of the concerns of people related to aging and disability, plans to address needs, and preferences about different aspects of long-term care insurance and financing.

This Brief was prepared through intramural research by the U.S. Department of Health and Human Services, Office of the Assistant Secretary for Planning and Evaluation, Office of Disability, Aging and Long-Term Care Policy. For additional information about this subject, visit the DALTCP home page at http://aspe.hhs.gov/office_specific/daltcp.cfm or contact HHS/ASPE/DALTCP, Room 424E, H.H. Humphrey Building, 200 Independence Avenue, S.W., Washington, D.C. 20201, Helen.Lamont@hhs.gov, William.Marton@hhs.gov, or Samuel.Shipley@hhs.gov.