Overview of Community Characteristics in Areas With Concentrated Poverty

The brief describes the characteristics of pockets of concentrated poverty within metropolitan areas and the individuals that live in these communities. Topics covered include race and ethnicity, family type, birth rates, and educational attainment. The figures presented are based on ASPE's analysis of the U.S. Census Bureau's 2007-2011 American Community Survey (ACS) 5-year data file.

Residents of high poverty neighborhoods experience the negative effects of their surroundings, not just those who are impoverished.

It is well established that living in areas of highly concentrated poverty inhibits opportunity and mobility of poor residents, beyond the obstacles their individual economic circumstances already impose, and it limits the surrounding area’s economic potential and social cohesionI. The outcomes associated with living in areas of concentrated poverty are well documented and extend to non-poor as well as poor residents of these communities. These include: diminished school quality and academic achievement; diminished health and healthcare quality; pervasive joblessness, employment discrimination and reduced employment networks; increased crime, especially violent crime; declining and poorly maintained housing stock and devaluation of home values; and difficulty building wealth and experiencing economic mobilityII. Compounding these problems, individuals living in poverty-saturated areas are less likely to live in the vicinity of non-governmental social service organizations, and proximity to these organizations is a key factor in service utilizationIII. There is evidence to suggest that poor individuals who live in more-advantaged areas are, in some regards, “buffered from the most negative impacts of povertyIV.”

I See William Julius Wilson, The Truly Disadvantaged. Chicago, IL, The University of Chicago Press, 1987; The Federal Reserve System and The Brookings Institution. 2008 “The Enduring Challenge of Concentrated Poverty in America: Case Studies from Communities Across the U.S.” Richmond, VA: The Federal Reserve Bank of Richmond.

Researchers most often define concentrated poverty as a significantly high proportion of areas residents living below the poverty level.

The concentrated poverty literature typically uses Census tracts as the geographical boundaries for studying high poverty communities. The Zip Code Tabulation Area (ZCTA) is, on average, a larger boundary, reflective in most cases of actual zip code boundaries, in which several Census tracts may exist. Census tract boundaries are determined based on population and, as such, are inconsistent in physical size, and may not reflect community members’ definitions of the local residential area of influence. In most densely populated metropolitan areas Census tracts are smaller than what many would consider a “neighborhood,” and generally are smaller than ZCTAs; but; they often are larger than ZCTAs in less densely-populated areas.1 Since ZCTA boundaries are determined by physical size rather than population, we can think of these as areas in which services would reach the surrounding community.2

Using this definition of concentrated poverty, roughly 12.8 million people, or four percent of the U.S. population, lived in 30/40 ZCTAs and about 35 percent of residents in these areas had incomes below the poverty line. About one in ten of America’s 42.7 million poor people lived in one of these neighborhoods 2009. Almost all of these individuals lived in metropolitan areas (i.e., central city or adjacent suburbs).

The distribution of America’s poor population is spatially uneven, and impoverished individuals, particularly those who live in areas of highly concentrated poverty, are overrepresented in inner-city urban areas, tribal reservations, and certain isolated rural regions. Each of these settings is unique, with distinct implications for possible poverty-alleviating interventions. This brief focuses on the demographics and community characteristics of the 531 high-poverty ZCTAs that are in metropolitan (urban and suburban) areas, most of which are in the central cities of their metropolitan areas. Later briefs will cover the unique characteristics of rural and tribal areas of concentrated poverty.

2 With the caveat that nothing is perfect, by using the ZCTA as the geographic unit of analysis, we identify characteristics using a larger geography that may more closely resemble a service delivery area and is more convenient for aligning data on area needs and services.

3 Although 691 ZCTAs met the criteria outlined above, one of those areas has a population of only 75 and is the site of a Veteran’s Affairs Health Center, so it was excluded from the analysis.

Areas of concentrated poverty look different from less-impoverished areas across several indicators of individual and community well-being that are analyzed in this brief.

Data for this analysis comes from the U.S. Census Bureau’s 2007-2011 American Community Survey (ACS) 5-year estimates. The Zip Code Tabulation Area (ZCTA) is the primary unit of analysis and data were obtained for each of the focal ZCTAs across a number of demographic, social, and economic variables. We examine indicators of racial segregation, economic mobility (e.g., education, employment), immigration (e.g., nativity, citizenship, language proficiency), and family formation (e.g., household structure, birth rates). [In addition to the data highlighted in the brief narrative, supplementary tables and figures are provided in the Appendix].

Racial and ethnic minorities are overrepresented in the concentrated poverty population, and concentrated poor communities in metropolitan areas are often highly segregated.

Regional variation in the racial composition of these areas is most dramatic for Hispanic and black populations. For example, over two-thirds of individuals living in areas of concentrated poverty in the West are Hispanic, and only one in 10 individuals in these communities is black. Alternatively, in the Midwest region, black individuals account for 60 percent of the region’s high poverty area population, and just over one in 10 individuals is Hispanic.

High poverty metropolitan ZCTAs are most likely to be majority black or Hispanic.

Areas of poverty concentration tend to be very racially segregated with over three- quarters of residents in areas with majority minority populations belonging to the racial group that makes up the largest share of the population. Just over 46 percent of concentrated metropolitan poor areas are majority black; 32 percent are majority Hispanic, and nearly 8 percent are majority white. In only 14 percent of the concentrated poverty areas in metropolitan areas is there no single racial or ethnic group that constitutes a majority of area residents. 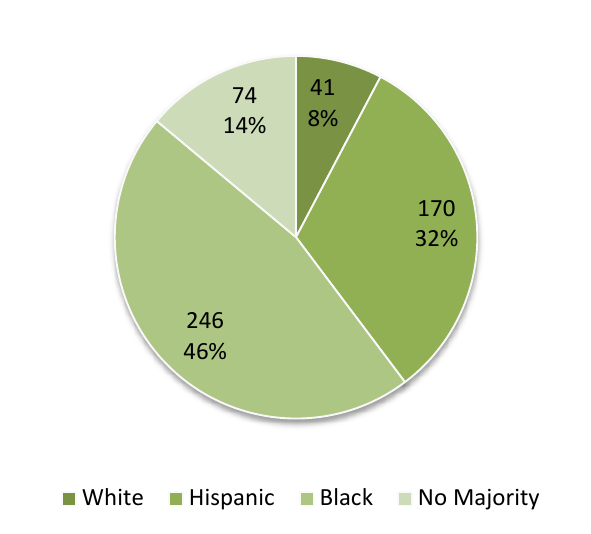 One out of every five people who live in metropolitan areas of concentrated poverty was born outside of the United States. Most of these 2.4 million individuals live in the West and South regions of the country. Nationally, roughly 13 percent of the population and 16 percent of the poverty population is foreign born.

In over one-third of households in areas of concentrated poverty, English is not the primary language spoken at home.

One in nine of all teen births in the United States are to young women who live in metropolitan areas of concentrated poverty.

In the average metropolitan concentrated poverty ZCTA, the teen birth rate is 2.25 times higher than the national rate of 27 births per thousand females ages 15 to 19.6 The teen birth rate in high poverty ZCTAs was 63 for every 1,000 young women ages 15 to 19, and in every region it was at least twice the national level, on average. In one quarter of the concentrated poverty areas, the teen birth rate was 87 births for every 1,000 15 to19 year old females, more than three times the overall teen birth rate. And in 10 percent, or about 53 ZCTAs, teen birth rates exceeded 133 births per thousand young women, almost five times the national teen birth rate, and more than
double the overall fertility rate among all women of child-bearing age. These high poverty metropolitan ZCTAs are home to five percent of the Nation’s 15 to 19 year old females. Yet, 11 percent of all births to teens in the United States are to teens in these neighborhoods. 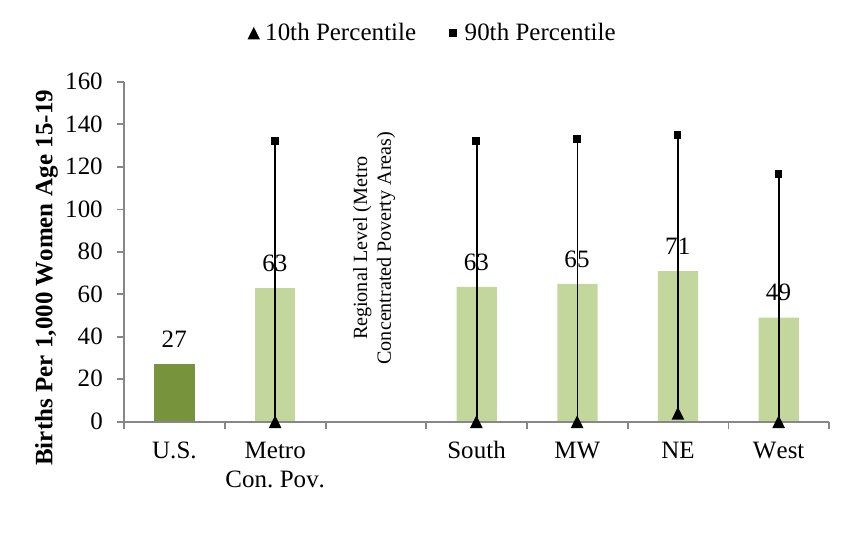 Of the 3.2 million women of child-bearing age (15-50) living in metropolitan areas of concentrated poverty, 240,000 reported giving birth in the year prior to survey response, for a birth rate of 75 births per thousand women age 15 to 50. The overall birth rates in these areas do not differ markedly from those for the Nation, particularly when one nets out the effects of the very high differential for teen births. The national birth rate for the same time period was 56 per thousand and the birth rate among all poor women was 98 per thousand.

6 The American Community Survey (ACS) generally produces and undercount of teen births relative to the actual level found in Vital Statistics, which is around 31 births per 1,000 females age 15 – 19 for the most recent year (2011). And thus, these ACS estimates are roughly a bit lower, still, than the actual values for the corresponding 2007-2011 period considering the teen birth rate, as measured by Vital Statistics, declined by 25% during that time period.

Children in metropolitan high poverty communities are more than twice as likely to be raised by a single mother than the average child.

Figure 4: Average Share of Households with Children Headed by a Single Female 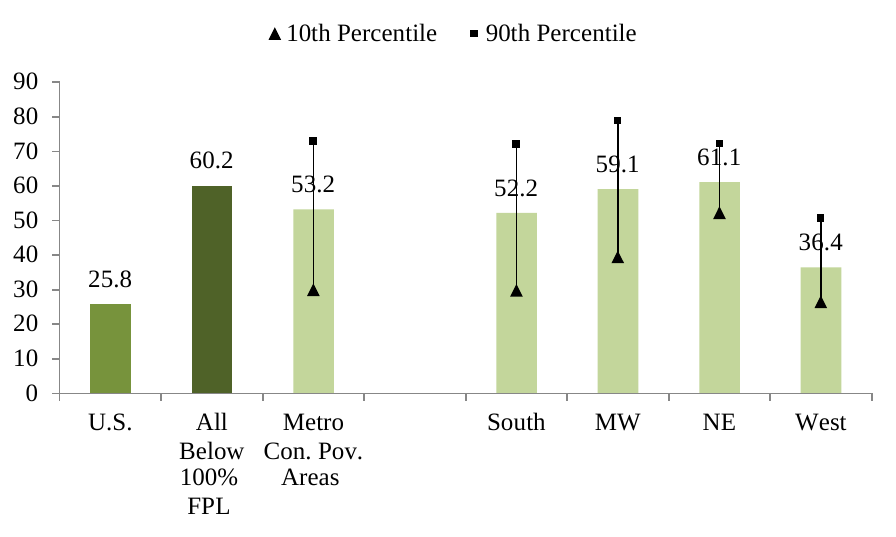 In the average metropolitan concentrated poverty area, only 45 percent of the working-age population (age 16 and older) is employed, or looked at differently, the modal adult is jobless (i.e., unemployed or not in the labor force). The national employment-to-population ratio for the same time period (2007-2011) was 59 percent. Among all poor individuals in the United States who are over age 16, roughly 32 out of every 100 are employed.7

Nationally, male unemployment is higher than that of females (8.3% vs. 7.6%), the same pattern holds in these high poverty areas, but at more than twice the national levels for men and women. The average male unemployment rate in these areas is 17.3 percent; the average rate for females is 15.6 percent.

7 This number includes people over the age of 64 and those who are in school, and, as such, is lower than that of the working-age poor population between age 25 and 65.

In the average metropolitan concentrated poverty area, one in three adults older than 25 did not graduate from high school or earn a GED.

Compared to the national average, adults in these areas were twice as likely to not graduate from high school and almost three times less likely to have a bachelor’s degree, on average. These areas are home to less than four percent of the Nation’s population over the age of 24. However, over eight percent of the population older than 24 that did not complete high school or earn a GED lives in these areas. High school completion is even lower in Western concentrated poverty areas where, on average, more than two out of every five adults over the age of 24 did not earn a high school diploma or GED.

Figure 5: Average Share of Adults over Age 24 without a High School Diploma8 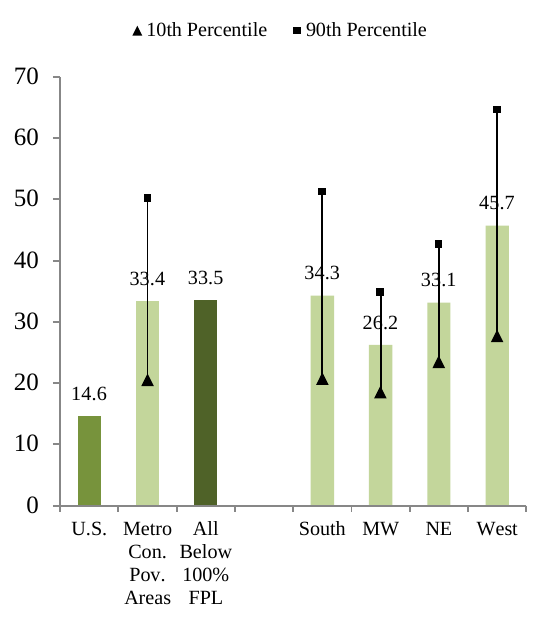 Figure 6: Average Share of Adults over Age 24 with at least a Bachelor’s Degree9 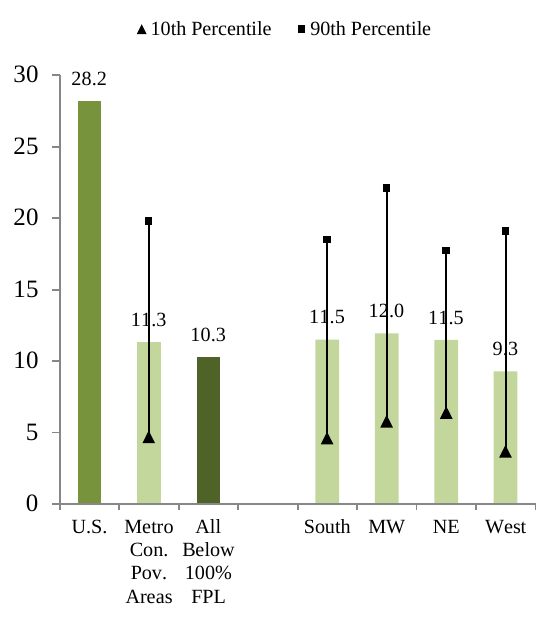 8 The value for metropolitan concentrated poverty areas includes all people living in that area, not just people who live below the poverty level. It is likely that poor individuals in these areas have even higher rates of not completing high school than those seen in the overall poverty population.

9 The value for metropolitan concentrated poverty areas includes all people living in that area, not just people who live below the poverty level. It is likely that poor individuals in these areas have even lower rates of college completion than those seen in the overall poverty population.

The characteristics of communities with concentrated poverty vary across demographic and spatial dimensions.

Research associates several factors with higher concentrations of poverty: economic change from the production of goods to information processing; migration patterns of the non-poor; racial and economic segregation; discriminatory and segregating housing policies; increasing immigration; the rise in births to unwed mothers; and the decline in multigenerational economic mobility, especially for black individuals.V These factors suggest that trends in concentrated poverty vary across several demographic and spatial dimensions.

V The Federal Reserve System and The Brookings Institution. 2008

Appendix Figure 1: Average Share of Population that is Foreign Born 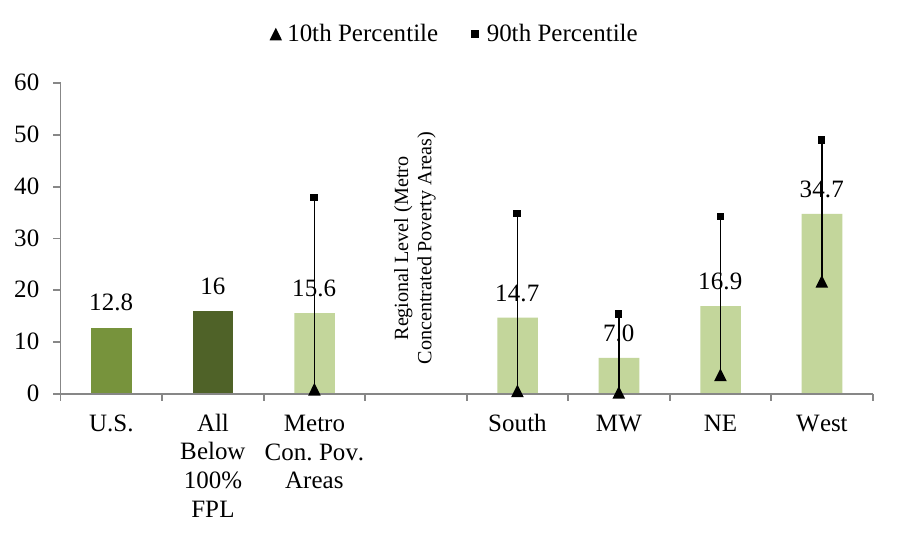 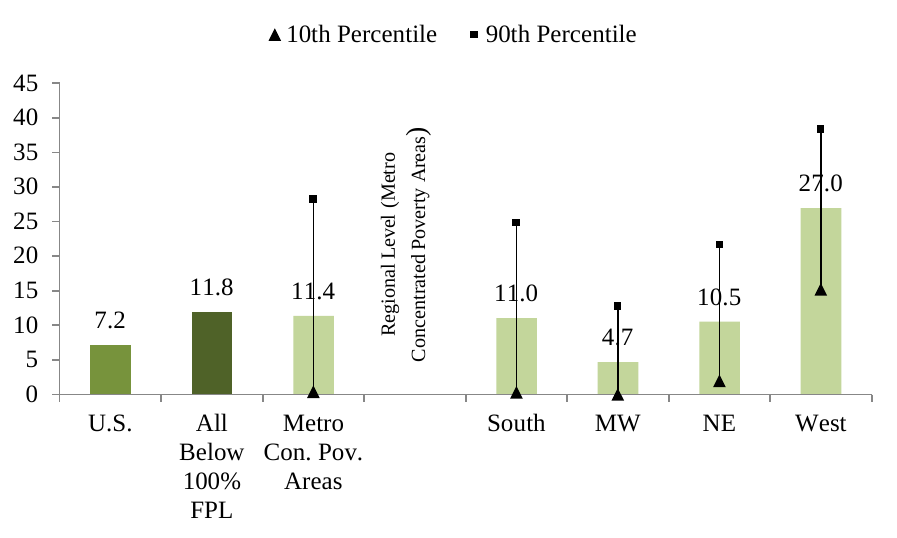 Appendix Figure 3: Average Share of Population that Does Not Speak English at Home 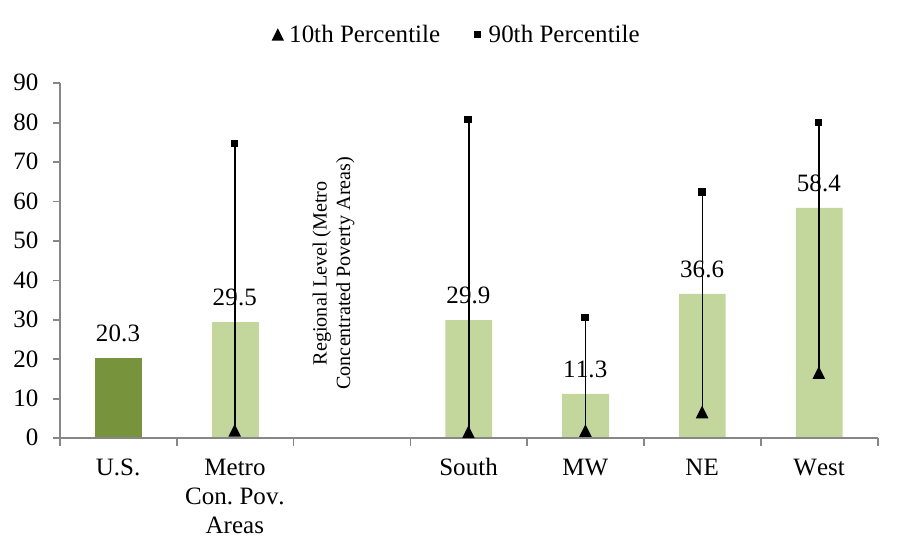 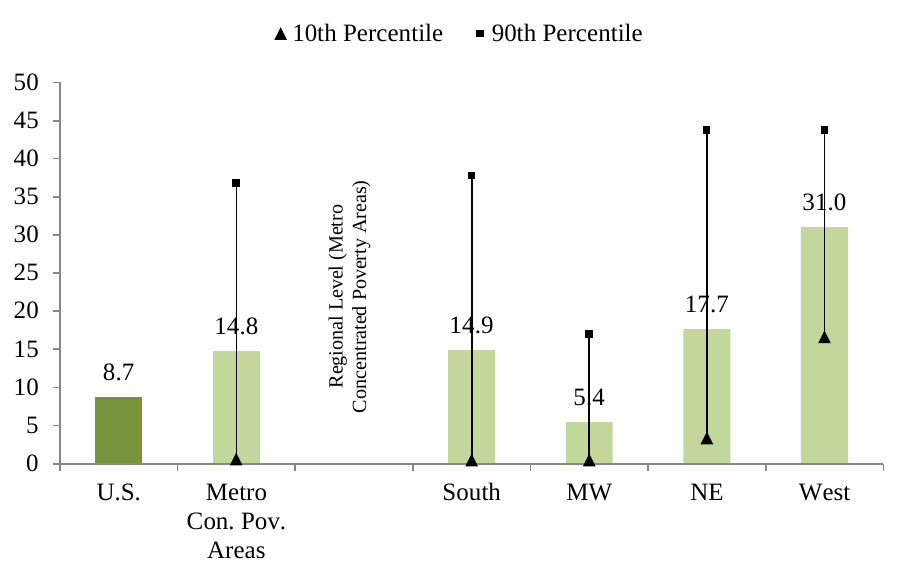 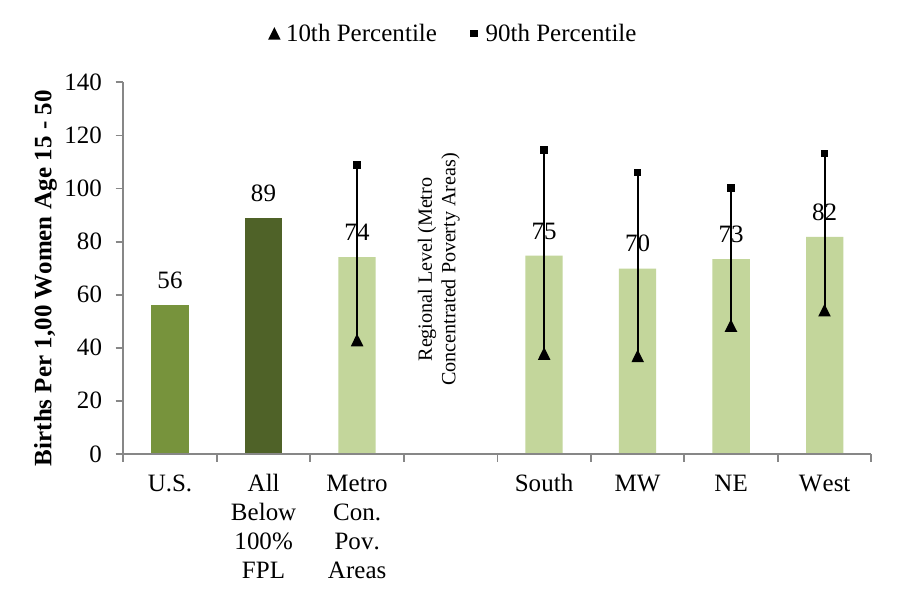 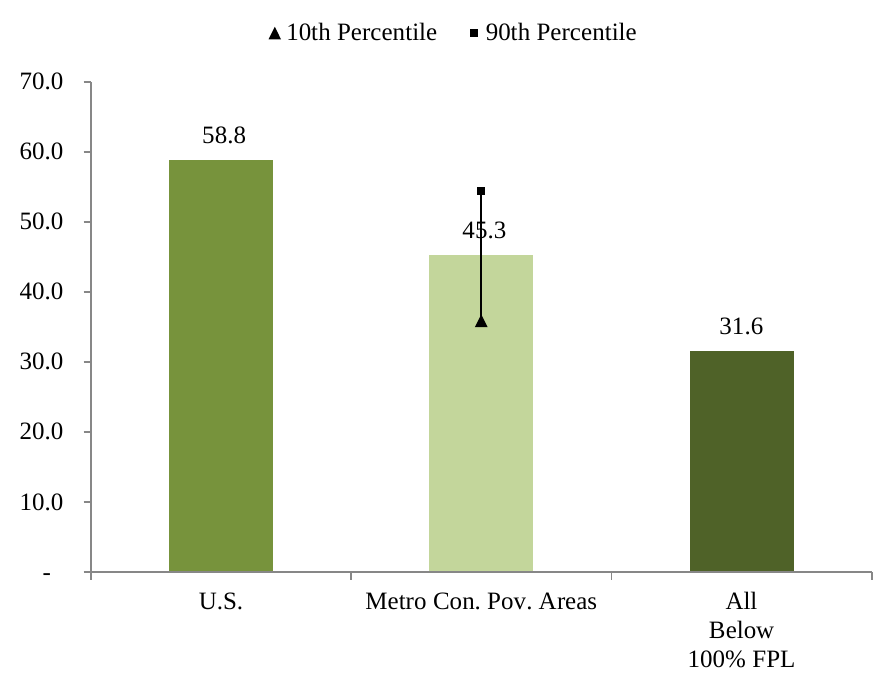 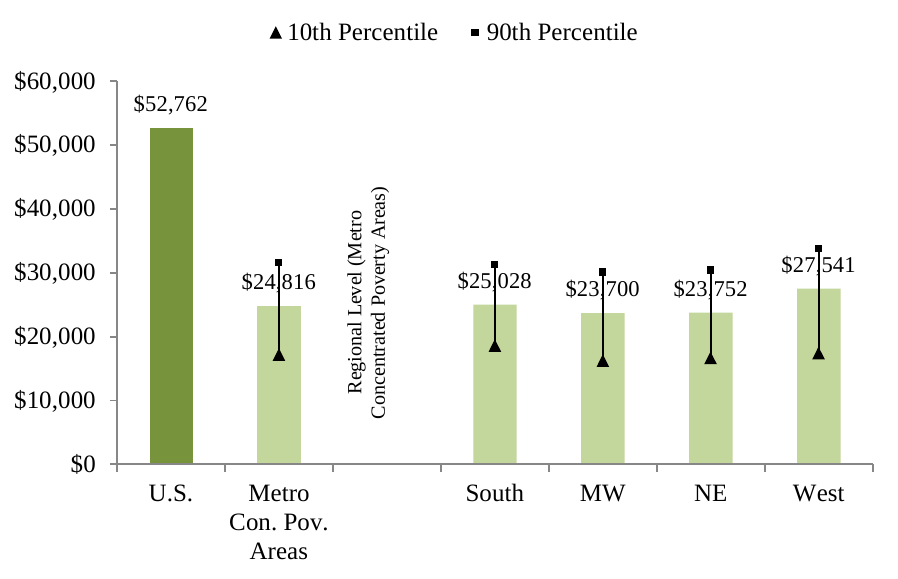 10 The value for metropolitan concentrated poverty areas includes all people living in that area, not just people who live below the poverty level. Please take care when making comparisons to the overall poverty population.