Disclaimer: Persons with disabilities having problems accessing this document may call (202) 690-6870 for assistance.

The rate of national health care spending growth per person has been on a downward trajectory in recent years (see Figure 1). This downward trend has been especially significant for the Medicare program since 2009. In fact, the most recent data show that the average per enrollee annual spending growth rate for the Medicare program (including both Traditional Medicare and the Medicare Advantage (MA) program) for 2009-2012 was one-third of the average growth rate from 2000-2008: 2.3 percent versus 6.3 percent (data not shown in table).1 The preliminary estimate of the per enrollee expenditure growth rate for Medicare in 2013 is only 0.1 percent. In other words, there was essentially no growth in Medicare expenditures on a per capita basis last year. The number of beneficiaries covered by the program is rising by about 3 percent per year, and the aggregate (across all beneficiaries) estimated Medicare expenditure growth rate for 2013 is 3 percent.2 Early claims data as well as Treasury data on Medicare payments from the first half of 2014 indicate that very slow per capita growth has continued so far this year, although final spending growth estimates will not be available for some time.3

Note: Growth rate for 2006 only includes Parts A and B to avoid artificially high growth from introduction of the Part D program.

Due to the recent slowdown in spending growth, the Medicare Board of Trustees and the Congressional Budget Office (CBO) have both lowered their projections of Medicare spending in future years.4 In the 2014 Medicare Trustees Report, released on July 28, OACT projects that the solvency of the Hospital Insurance (HI) Trust Fund will be extended an additional 4 years beyond last year’s projection from 2026 to 2030.

The improved outlook in the Trustees Report is due, in part, to:

Medicare spending growth for other services and items is also low for a variety of reasons.5

This issue brief provides additional analyses of recent trends in per enrollee spending in the traditional Medicare program. Specifically, we examine spending trends for detailed service categories and for geographic areas. Key findings include:

1 Growth percentages for total Medicare spending calculated from Centers for Medicare and Medicaid Services National Health Expenditure Accounts. Growth rate for 2006, used to calculate average growth rate for 2000-2008, only includes Parts A and B to avoid artificially high growth from introduction of the Part D program.

2 Personal communication, Centers for Medicare and Medicaid Services Office of the Actuary, estimated per capita spending growth for calendar year 2013.

5 Board of Trustees, 2014 Annual Report of the Boards of Trustees of the Federal Hospital Insurance and Federal Supplementary Medicare Insurance Trust Funds (Washington, D.C.: Centers for Medicare & Medicaid Services, 28 July 2014).

7 CMS Office of the Actuary estimated per capita spending growth for calendar year 2013.

There is considerable uncertainty regarding the relative contribution of various factors to the slowdown in national healthcare spending. Factors likely to have affected spending growth in recent years include:

How much of the slowdown in national health spending is due to the recession and its subsequent slow recovery has been a matter of considerable discussion. Recent studies applying different methods have found a substantial range in estimates.9 However, a CBO analysis suggests that, whatever role the recession may have played in driving trends in private health care spending, the recession appears to have played a small role in driving trends in Medicare spending. Their analysis estimated the effect of changes in wealth and income due to the recession on Medicare beneficiaries’ use of health care services and found that the recession had little effect on demand for health care services by Medicare beneficiaries.10 As evidenced by Figure 1 above, the slowdown in per capita spending growth began prior to the recession, suggesting that other factors have been at play. In addition, the CBO and other analysts find that reductions in utilization rather than payment played a significant role suggesting that more fundamental changes in the health care delivery system may account for these trends.11

II. Quantifying the Impact of the Slowdown in Medicare Spending Growth

Figure 2 displays per enrollee spending for beneficiaries in the traditional Medicare program. The figure includes spending on Part A and B services, as well as on prescription drugs (Part D) in 2009, 2010, 2011, and 2012 (the latest year of data available from the Master Beneficiary Summary File). The figure also displays an illustrative trend line showing what spending would have been if the growth rate during these years had been equal to the average growth rate of per enrollee spending for 2000-2008. Growth attributable to Part D spending was excluded for 2006 because spending growth for the years 2000-2008 would have appeared artificially high due to introduction of the Part D program. The difference between the trend lines implies a substantial reduction in accumulated spending of $116.4 billion relative to what spending would have been if the average growth rate for 2000-2008 had continued through 2012. 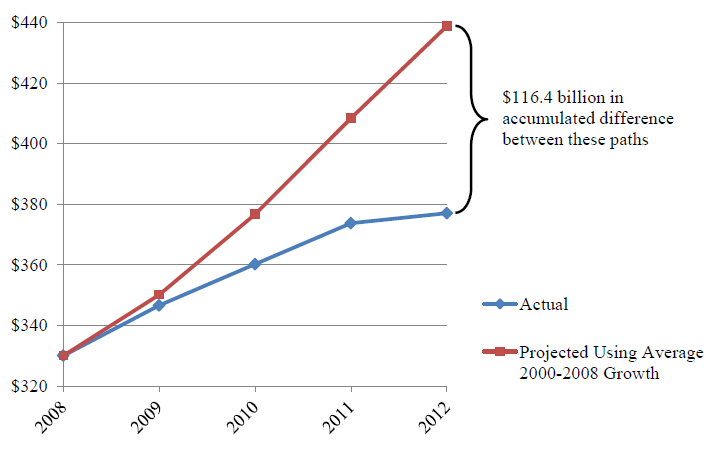 Notes: Projections include spending on Medicare Parts A, B, and D for traditional Medicare beneficiaries.

Growth rate for 2006, used to generated 2000-2008 projection only includes Parts A and B to avoid artificially high growth rate from introduction of the Part D program.

In order to provide a more detailed analysis of the slowdown in Medicare spending, we examined trends in spending by service category and by geographic area. Table 1 compares the compounded average growth rate for the 2000-2008 period and more recent years (2009-2012), by service category. Definitions for each of the service categories used in this analysis are reported in the Appendix (see Table A.1). As with any time period comparisons, the beginning and end years chosen can affect the findings. The earliest year available for the Master Beneficiary Summary File (MBSF, summary data on spending and utilization for beneficiaries in the traditional Medicare program) is 1999, which was used to calculate growth in 2000. The first year of the recession (2008) was selected as the end point for the historical period. The latest year of available MBSF data is 2012. All service categories, with the exception of Anesthesia, experienced declines in their average growth in recent years.