This brief, part of a series on disconnected low-income men, summarizes selected data from published reports on incarceration in the United States. Low-income men are defined as those age 18 to 44 who live in families with incomes below twice the federal poverty level (FPL)1 and do not have four-year college degrees. Other briefs in the series examine low-income men’s demographic profiles, education, employment, and health.

We present data on imprisonment, one component of criminal justice system involvement, highlighting stark disparities by race, education, and place. The statistics on criminal offenses and incarceration cited reflect changes in federal and state crime policies over the past few decades, especially those related to drug offenses. These policies have led to mass incarceration—that is, the imprisonment of comparatively and historically high proportions of the population that cannot be accounted for by changes in crime rates. The US Department of Justice is reviewing laws and agency enforcement policies that may have had a disparate impact on African Americans and Hispanics, both in terms of incarceration and the collateral damage to their families and communities.2 Some of these impacts are summarized in this brief.

Young men of color are a particular focus because of their high rates of incarceration. While they are highly concentrated in poor neighborhoods, especially in urban areas, most available data are at the state and national level. Therefore, we mainly focus on state and national data that provide the most extensive documentation of the racial and ethnic aspects of incarceration. Since the criminal justice data generally do not include income of the prisoners’ families, we are unable to identify the proportion of incarcerated men who are low income. To the extent that prisoners are separated from mainstream society, however, the men in focus are disconnected and afterward face challenges reconnecting to the mainstream.

According to a 2012 Bureau of Justice Statistics bulletin on state and federal prisoners, African American and Hispanic men are incarcerated at higher rates nationally than white men (Carson and Sabol 2012).3 Among all US male residents in 2011, 932 men per 100,000 were imprisoned.4 When broken out by race and ethnicity, striking differences appear: incarceration rates for African American men are over six times higher than rates for white men and nearly two and a half times higher than rates for Hispanic men (figure 1).

Figure 1. 2011 US Male Incarceration Rates by Race and Ethnicity 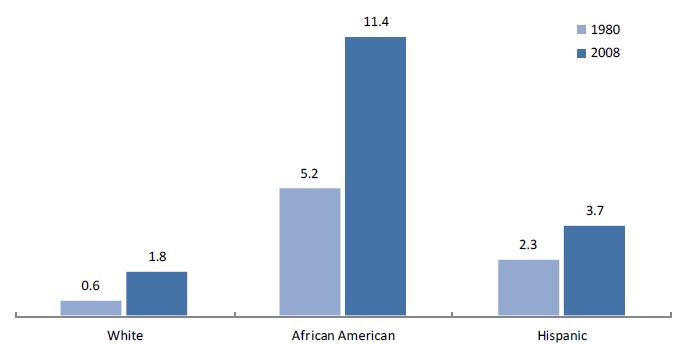 Most men in prison in 2011 were between 30 and 34 years old, according to the 2012 Bureau of Justice Statistics report. In that age range, 1,115 white men were imprisoned per 100,000 men in the population. Rates were higher among African American and Hispanic men, at 7,517 and 2,762, respectively, per 100,000. Although the racial differences in prison rates among men age 30–34 are quite pronounced, the racial disparities are highest among young men between the ages of 18 and 19:5

The Male Prison Population Has Grown

Figure 3. Lifetime Likelihood of Incarceration among Men Born in 1974 versus 2001 by Race and Ethnicity 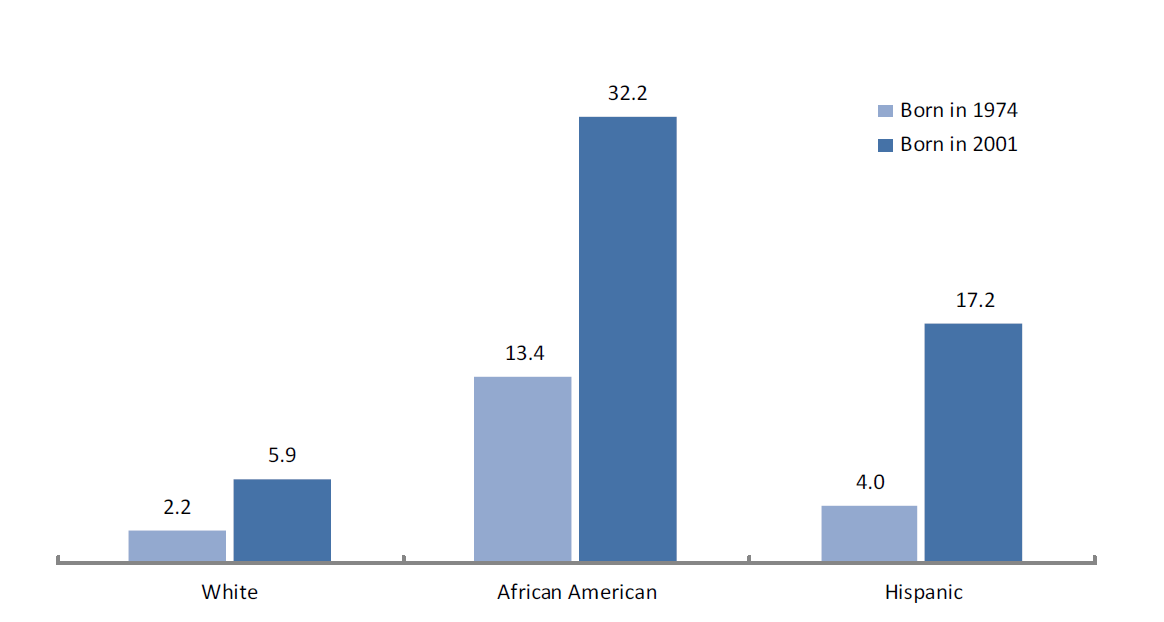 Source: Thomas Bonczar, “Prevalence of Imprisonment in the US Population, 1974–2001,” NCJ 197976 (Washington, DC: US Department of Justice, Office of Justice Programs, Bureau of Justice Statistics, 2003).

Despite the overall growth in prison rates, national statistics show a declining rate in the total proportion of prisoners who are African American, which fell from 46 percent in 2000 to 39 percent in 2010 (Guerino, Harrison, and Sabol 2011).

Lifetime likelihood of imprisonment has increased

Another way to measure incarceration trends is to examine the likelihood that a man will enter prison at some point in his lifetime. In a special report from the Bureau of Justice Statistics, Thomas Bonczar (2003) finds that white,

African American, and Hispanic men born in 2001 are significantly more likely to spend some time in prison than

white, African American, or Hispanic men born in 1974 (figure 3).6 According to the report, if present trends continue, the lifetime likelihood of going to prison for men born in 2001 will be triple the likelihood of those born in

1974 (11.3 versus 3.6 percent). These data demonstrate that future generations of men, particularly men of color, are statistically more likely than past generations of men to spend time in prison at some point in their lives. Evidence further suggests that future generations of children are more likely to have an incarcerated parent. According to the Pew Charitable Trusts, the share of children under 18 with an incarcerated parent rose from 0.8 percent in 1980 to 3.6 percent in 2008. In 2008, 11.4 per-cent of African American children had a parent in prison, compared with 3.5 percent of Hispanic children and 1.8 percent of white children (Pew Charitable Trusts 2010).

Prisoners of Color Are More Likely to Be Disenfranchised

“Felon disenfranchisement,” as defined by The Sentenc-ing Project, are laws that restrict inpiduals with felony convictions from voting.7 States set their own laws, so the extent that inpiduals with felony-level crimes are disenfranchised by this definition varies by state. Data from The Sentencing Project capture racial disparities in incarceration rates and felony disenfranchisement rates (number of people incarcerated for a felony of-fense as a percentage of the voting-age population) by state.8 All but two states (Maine and Vermont) restrict inmates from voting. However, states vary by how much they also restrict parolees, probationers, and ex-felons from voting. Among four of the more populous states—California, Illinois, New York, and Pennsylvania—Illinois and Pennsylvania restrict only inmates from voting, while California and New York restrict both in-mates and parolees (Uggen, Shannon, and Manza 2012). The strictest policies forbidding ex-felons from voting in 2010, as well as those incarcerated and those on probation or parole, are found in 11 states, including Florida, Kentucky, Tennessee, and Virginia (figure 4).9 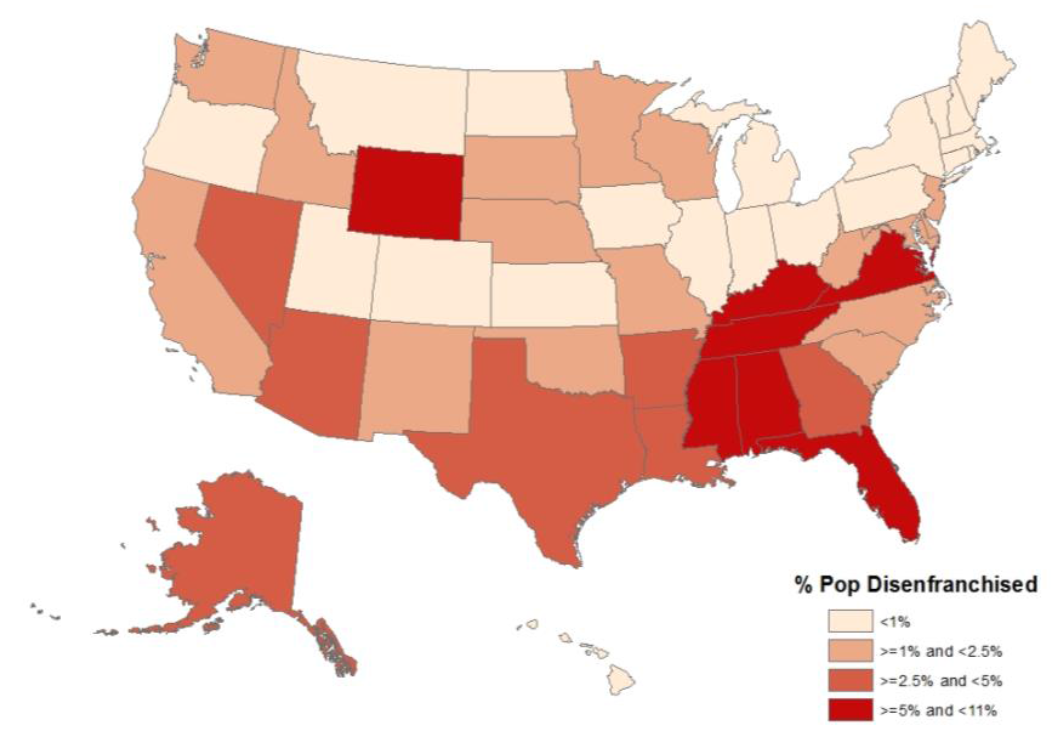 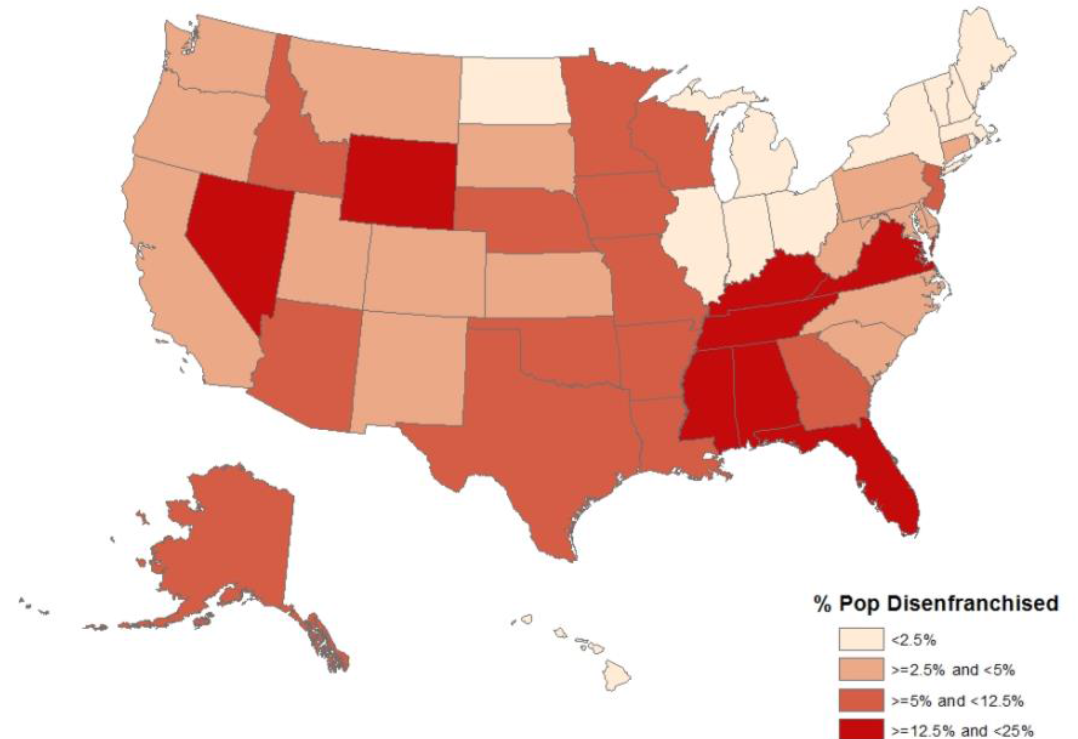 As described earlier, felony disenfranchisement rates are highest in states with the strictest policies restricting ex-felons from voting. 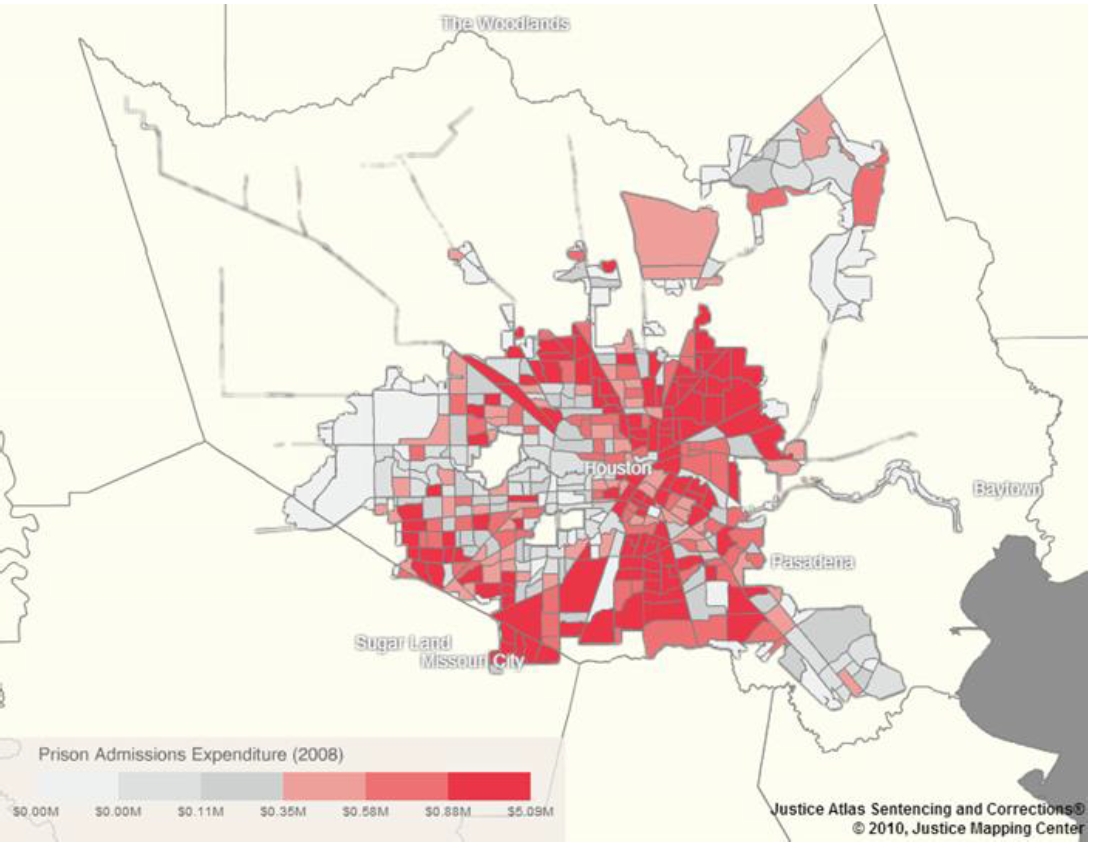 Urban communities face both civic costs and significant economic costs because of their members’ felony disenfran-chisement. The prison population comes disproportionately from poorer neighborhoods;11 as a result, some poor neigh-borhoods have what researchers call “million-dollar blocks,” referring to the amount of money the government spends annually incarcerating individuals. Moreover, the families in these communities lose the economic and social support of those who have been incarcerated.12

The Justice Mapping Center used prisoners’ pre-incarceration residential information to create a visual representation of these million-dollar blocks in several metropolitan areas. Figures 6 and 7 show Houston and New York City as examples of two cities in different regions of the country. In both, Hispanics are the largest share of low-income men; in Houston, they are the majority. The maps display state costs to send their residents to prison in 2008 by zip code. The most expensive zip codes are concen-trated in certain sections of each city. In almost all these neighborhoods, about half the households have annual in-comes less than $25,000 and almost all households are nonwhite or Hispanic. The cost of imprisonment and asso-ciated expenditures in these areas can be as high as $28.6 million, according to the Justice Mapping Center. 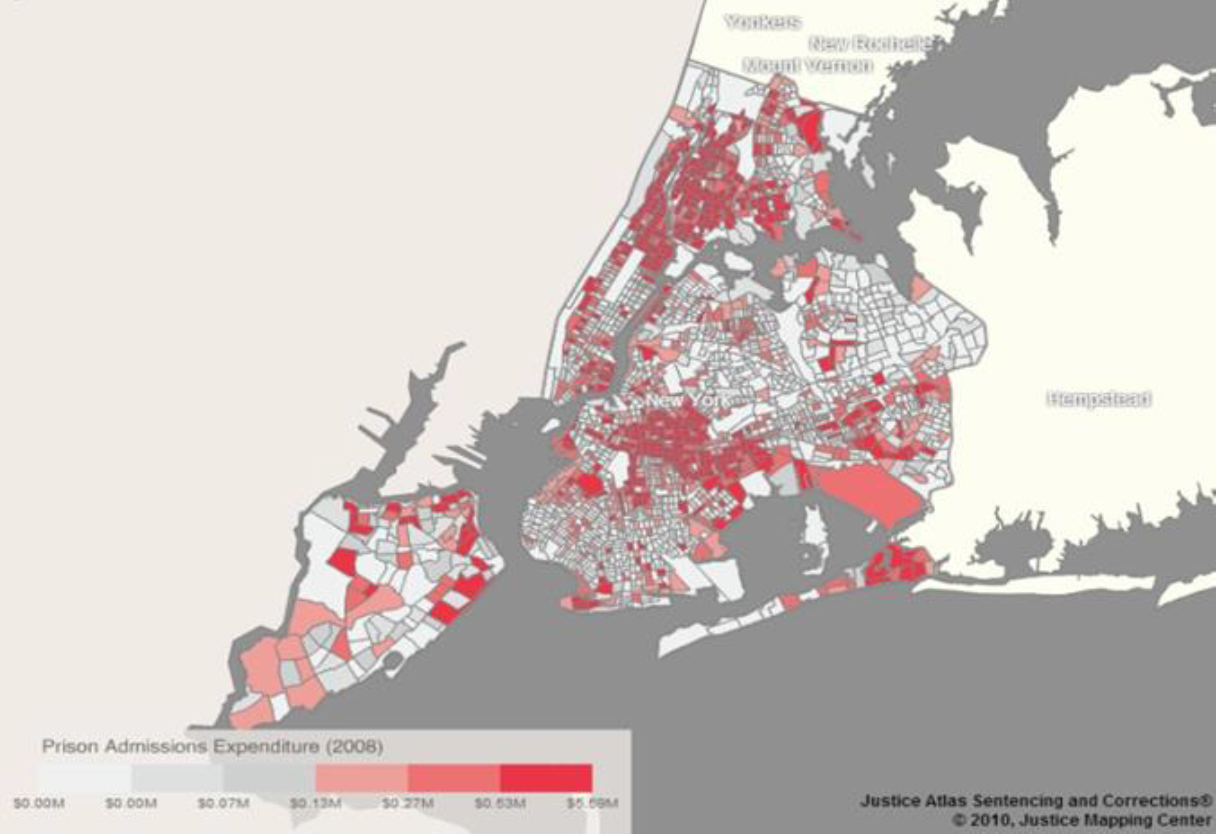 The costs detailed above, though notable, skim the sur-face of the true cost of imprisonment. Not included in these estimates are the opportunity costs in lost wages or human capital development, the future economic burden from a felony record, and the economic echo effect on the prison-er’s children, including the more difficult to quantify mental and societal burdens placed on families and communities.

Statistics on prisoners do not allow us to determine how disproportionately low-income men are imprisoned, but data on imprisonment by race and ethnicity provide a stark picture of the extent of disparities. Since African American and Hispanic men are more likely to be low income, this perspective gives some sense of the impact of being low income on encounters with the most punitive part of the criminal justice system: incarceration (McDaniel et al. 2013). Data presented here show increasing life chances for young men in these groups to be imprisoned—differentials that continue earlier trends by race.

Imprisonment also affects whether these men are able to participate fully in civic life after returning to society. In addition, the highly variable state-disenfranchisement rates in the United States show how geography can shape the lives of low-income men in this domain. It also affects the communities in which the prisoners live and society at large. Men of color, men without high school degrees, and men living in states with strict felony disenfranchisement laws are most affected by the criminal justice system.

Bonczar, Thomas. 2003. “Prevalence of Imprisonment in the US Population, 1974-2001.” NCJ 197976. Washington, DC: US De-partment of Justice, Office of Justice Programs, Bureau of Justice Statistics.

Johnson, Rucker C. 2009. “Ever-Increasing Levels of Parental Incarceration and the Consequences for Children,” In Do Pris-ons Make Us Safer? The Benefits and Costs of the Prison Boom, edited by Steven Raphael and Michael Stoll (177–206). New York: Russell Sage Foundation.

Raphael, Steven, and Michael A. Stoll. 2013. Why Are So Many Americans in Prison? New York: Russell Sage Foundation.

A large number of US men of prime working age are neither gainfully employed nor pursuing education or other training, suggesting a potentially significant disconnection from mainstream economic and social life. The Urban Institute, funded by the Office of the Assistant Secretary for Planning and Evaluation, US Department of Health and Human Services, convened the Race, Place, and Poverty symposium to better understand the experiences of men who were disengaged or at high risk of disengagement from mainstream economic and social systems. The symposium explored the state of knowledge on discon-nected low-income men and discussed effective strategies for improving their well-being.

We thank Vivian Gadsden, Waldo Johnson, and Thomas LaVeist for serving as consultants on the project and for their invaluable contributions to this report series and the symposium. We also gratefully acknowledge key advisor Jocelyn Fon-taine and other Urban Institute colleagues Gregory Acs, Bob Lerman, and Elizabeth Peters for their assistance and feedback. Finally, we give special thanks to the researchers and social service providers from across the country who participated in the symposium, and whose knowledge about low-income men enriched this work.