The Health of Disconnected Low-Income Men

This brief, part of a series on disconnected low-income men, examines their health insurance coverage and health status using data from the American Community Survey (ACS) and the Behavioral Risk Factor Surveillance System (BRFSS) with some additional information provided by the Kaiser Family Foundation. Low-income men are defined as those age 18 to 44 who live in families with incomes below twice the federal poverty level (FPL)1 and do not have four- year college degrees. Other briefs in the series examine low-income men’s demographic profiles, education, employment, and heightened risk of incarceration and disenfranchisement. We selected the most recent variables available at the state level that captured broad measures of health coverage and access, and general health.

We focus primarily on men’s connections to health care providers and systems, as opposed to disparities in specific health conditions. We present the national picture and highlight differences across states.

Less than half (49 percent) of low-income men age 18–44 in the United States have any insurance coverage (figure 1).2 The insured rate for low-income men is significantly lower than the rate for all men age 18–44, which is 71 percent. Low-income men are half as likely as all men in that age group to be covered by private insurance only (30 percent versus 62 percent) due to their lower rates of employment and employer-provided coverage.3 Low-income men are also more than twice as likely as all men age 18–44 to have public insurance only: 17 percent versus 7 percent. However, low-income men in this age range have relatively low public insurance coverage compared to other low-income populations, such as children and pregnant women, who qualify for Medicaid. For example, in 2010, 54 percent of children in families with incomes below 200 percent of FPL were covered by Medicaid or CHIP (Holahan and Chen 2011). Nondisabled childless adults have historically not been eligible for Medicaid regardless of their incomes, unless their state uses its own funds or receives a federal waiver (Kaiser Commission 2013).4

As a result of these relatively low rates of private and public insurance, 51 percent of low-income men lack any health insurance, significantly higher than the share of all men age 18–44 that are uninsured (29 percent).

Among the top 10 states, low-income men in Texas (11 percent), Georgia (13 percent), and Florida (14 percent) have the lowest rates of public insurance (public only or both public and private insurance). Low-income men in New York and Michigan have the highest rates of public insurance coverage (34 and 28 percent, respectively). New York, California, and Michigan are among the small number of states that provide Medicaid coverage to incomeeligible men without children using a federal waiver or state-only funding, while Illinois in November 2012 made adults in Cook County with incomes up to 133 percent of FPL eligible for Medicaid.5

Figure 1 also shows that low-income men in states with the lowest public insurance coverage have the highest uninsured rates: Texas (63 percent), Florida (60 percent), and Georgia (59 percent). Low-income men in states with the highest rates of public insurance (New York and Michigan) are the least likely to lack any health insurance coverage (42 and 43 percent, respectively).

Figure 1. Health Insurance Coverage by Type for Low-Income Men Nationwide and in the Top 10 States, 2008–1 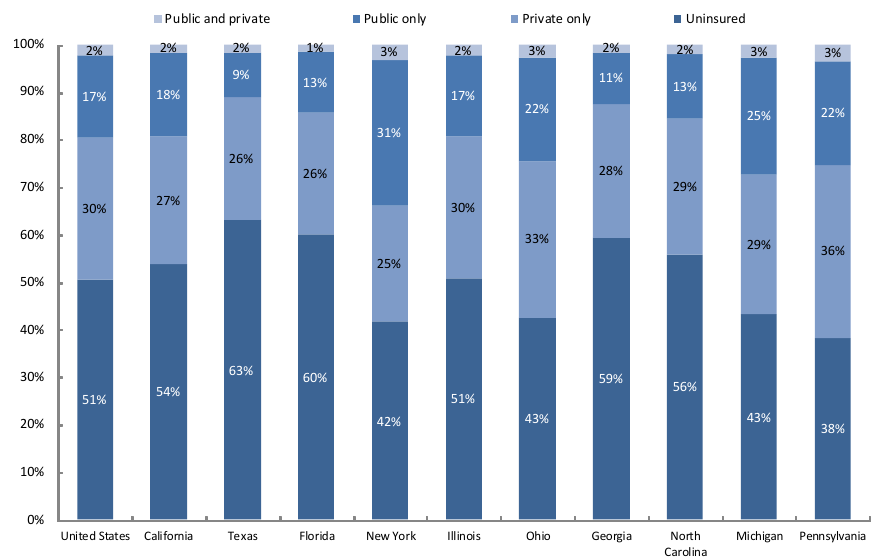 Source: ASPE tabulations of the American Community Survey (2008–10).
Notes: Low-income men are ages 18–44, live in families with incomes below 200 percent of the federal poverty level, and do not have four-year college degrees. “Top 10 states” are states with the largest populations of low-income men.

As shown in figure 2, the states with the highest uninsured rates for low-income men (above 50 percent) are located primarily in the southeast (Arkansas, Florida, Louisiana, Mississippi, North Carolina, South Carolina, and Georgia), the southwest (Texas, Oklahoma, New Mexico, and Colorado), and the west (California and Nevada). Northern areas of the country tend to have lower rates of uninsured men. The District of Columbia (23 percent) and Massachusetts (21 percent), Hawaii (26 percent), and Vermont (28 percent) have the lowest uninsured rates (data not shown). Massachusetts and Vermont have state health care systems designed to expand coverage to low-income populations, as does the District of Columbia.

Among low-income men nationally, Hispanics are the most likely to lack health insurance coverage (66 percent), followed by African American men (48 percent).6 White men have the lowest uninsured rate (41 percent).7 Many Hispanic men are foreign born and may not qualify for public health insurance coverage depending on their citizenship and immigration status (Kenney and Huntress 2012; Motel and Patten 2012). 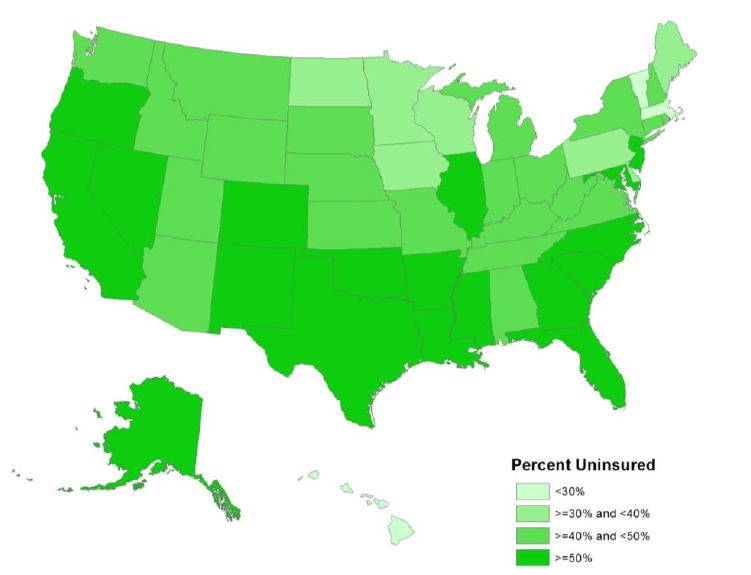 Figure 3. Share of Low-Income Men Reporting a Routine Checkup in the Past 12 Months by State, 2010 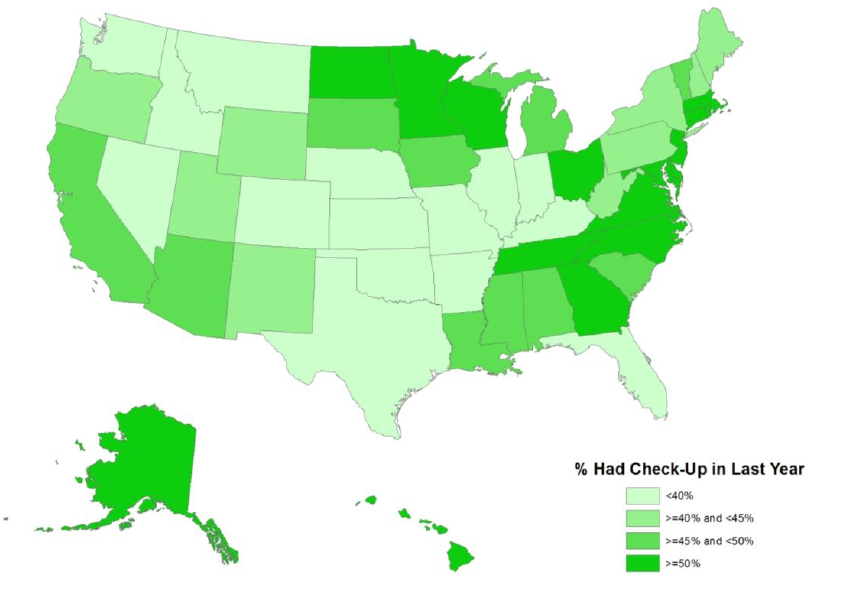 Source: Urban Institute tabulations of the 2010 Behavioral Risk Factor Surveillance System.
Note: Low-income men are age 18–44, live in families with incomes below $35,000, and do not have four-year college degrees.

The nation’s capital and states along the East Coast tend to have the highest rates of low-income men who report a routine checkup in the past year, ranging from 54 percent in Georgia to 74 percent in Massachusetts and the District of Columbia. Other states with relatively high rates of routine checkups for low-income men include Minnesota and Wisconsin (55 percent each). Given the variation in insurance coverage among these states, it would seem that something other than insurance drives or invites men to seek regular health care.

Nationally, a greater percentage of low-income African American men reports a routine checkup in past year (61 percent) than low-income white men (44 percent) and Hispanic men (40 percent) do. However, the checkup rates for men are generally lower than those for women at similar income levels. For example, the rate for African American women with incomes below $35,000 is above 80 percent.

Reports of health status across the states generally appear to follow trends in health insurance coverage. Nevada, which has the fourth-largest uninsured rate among low-income men, has the second-largest share of men reporting fair or poor health (31 percent). Similarly, Texas, New Mexico, and North Carolina have above-average uninsured rates and an above-average share of low-income men reporting fair or poor health. The District of Columbia, with the second-lowest uninsurance rate, has the highest share of low-income men reporting excellent or very good health (58 percent). 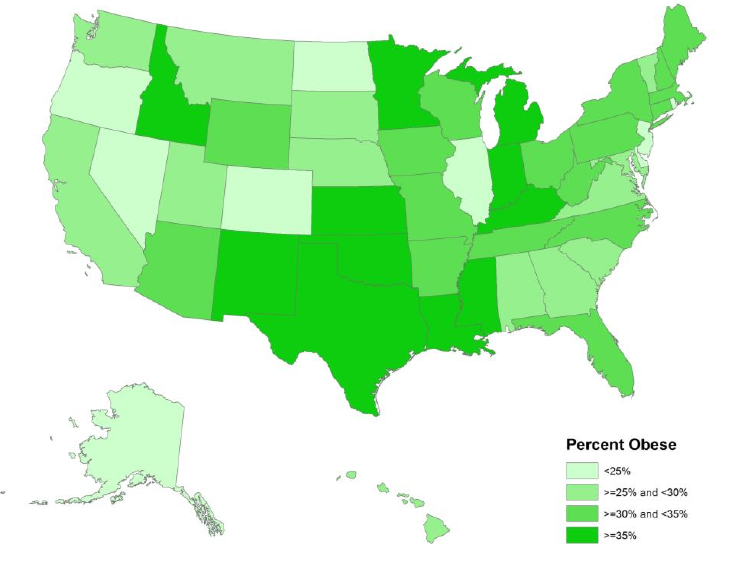 Source: Urban Institute tabulations of the 2010 Behavioral Risk Factor Surveillance System data.
Note: Low-income men are age 18–44, live in families with incomes below $35,000, and do not have four-year college degrees.

Compared with higher-income men age 18–44, low-income men are more likely to lack health insurance coverage, have lower access to routine health care, and have worse health 6 outcomes as measured by self-reported health and obesity. The health insurance coverage and health status of low-income men depend on where they live. Low-income men in Texas, Florida, and North Carolina, among the 10 states with the largest low-income male populations, have high uninsured rates, low rates of a routine checkup in the past year, and relatively high rates of self-reported poor/fair health and obesity.

A large number of US men of prime working age are neither gainfully employed nor pursuing education or other training, suggesting a potentially significant disconnection from mainstream economic and social life. The Urban Institute, funded by the Office of the Assistant Secretary for Planning and Evaluation, US Department of Health and Human Services, convened the Race, Place, and Poverty symposium to better understand the experiences of men who were disengaged or at high risk of disengagement from mainstream economic and social systems. The symposium explored the state of knowledge on disconnected low-income men and discussed effective strategies for improving their well-being.

We thank Vivian Gadsden, Waldo Johnson, and Thomas LaVeist for serving as consultants on the project and for their invaluable contributions to this report series and the symposium. We also gratefully acknowledge key advisor Jocelyn Fon-
taine and other Urban Institute colleagues Gregory Acs, Bob Lerman, and Elizabeth Peters for their assistance and feedback. Finally, we give special thanks to the researchers and social service providers from across the country who participated in the symposium, and whose knowledge about low-income men enriched this work.