A product of the Low-Income Working Families project

This brief, part of a series on disconnected low-income men, explores their education and employment outcomes using data from the American Community Survey (ACS, 2008–10) supplemented by other sources. Low-income men are defined as those age 18 to 44 who live in families with in-comes below twice the federal poverty level (FPL)1 and do not have four-year college degrees. Other briefs in the series examine low-income men’s demographic profiles, health, and heightened risk of incarceration and disenfranchisement.

We present data on the educational attainment of low-income men and compare them with men who live in families with incomes above 200 percent of FPL (or “higher-income men”). While this brief primarily focuses on men without postsecondary degrees, we begin by examining the spectrum of educational disparities for men across the income distribution. 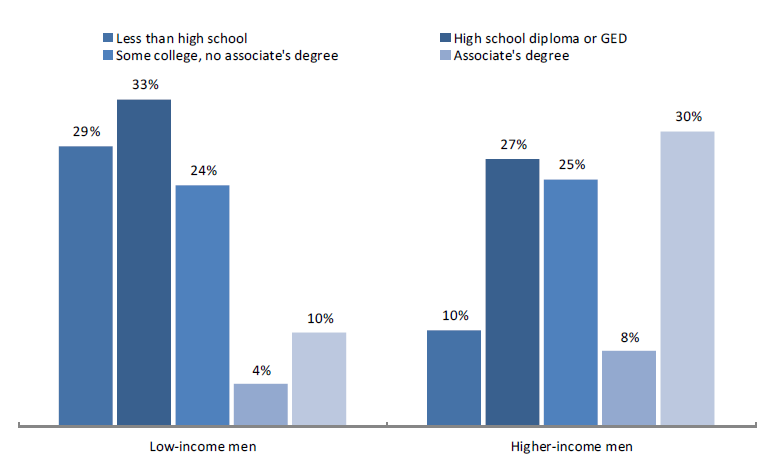 Low-Income Men Are More Likely to Be Unemployed and Underemployed

Employment status can be measured in a number of ways. This brief uses several definitions for a more complete picture of low-income men’s connections to work. In addition to the official unemployment rate, we examine men’s participation in the labor force and their engagement in part-time work.

Looking at unemployment reveals larger differences: low-income men have much higher unemployment rates (ratio of unemployed to labor force participants) than the national average of all men 18 to 44: 21 percent versus 11 percent.6 Among low-income men, African American men are the most likely to be unemployed (35 percent). Their unemployment rate is one and a half times as high as the rate for white men (21 percent) and more than twice as high as the rate for Hispanic men (14 percent).

The vast majority of low-income men have personal income of less than $25,000 a year. Nationally, 83 percent of low-income men report positive personal income (i.e., income greater than $0). Of those reporting positive income, 37 percent report income of less than $10,000, or below the poverty threshold for a single person (figure 2). This is more than double the share of all men age 18 to 44 (16 percent). Low-income men are twice as likely as all men to report personal income between $10,000 and $25,000, or around twice the poverty level for a single person (49 percent versus 25 percent). 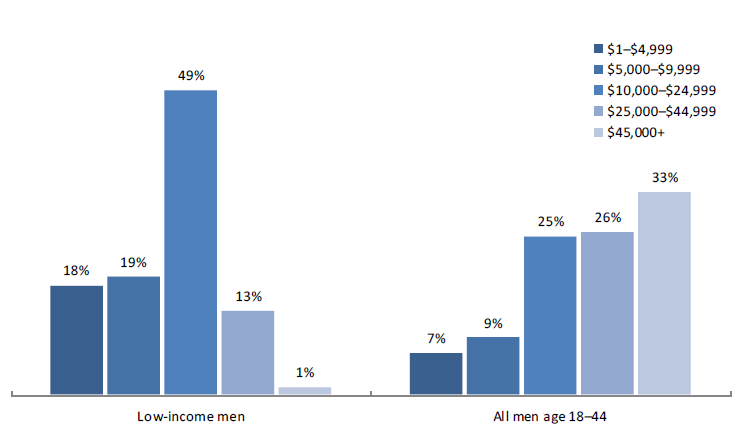 Source: ASPE tabulations of the American Community Survey (2008–10).
Note: Low-income men live in families with incomes below 200 percent of the federal poverty level and do not have four-year college degrees.

A large number of US men of prime working age are neither gainfully employed nor pursuing education or other training, suggesting a potentially significant disconnection from mainstream economic and social life. The Urban Institute, funded by the Office of the Assistant Secretary for Planning and Evaluation, US Department of Health and Human Services, convened the Race, Place, and Poverty symposium to better understand the experiences of men who were disengaged or at high risk of disengagement from mainstream economic and social systems. The symposium explored the state of knowledge on disconnected low-income men and discussed effective strategies for improving their well-being.

We thank Vivian Gadsden, Waldo Johnson, and Thomas LaVeist for serving as consultants on the project and for their inval-uable contributions to this report series and the symposium. We also gratefully acknowledge key advisor Jocelyn Fontaine and other Urban Institute colleagues Gregory Acs, Bob Lerman, and Elizabeth Peters for their assistance and feedback. Finally, we give special thanks to the researchers and social service providers from across the country who participated in the symposium and whose knowledge about low-income men enriched this work.