New analysis from the Department of Health and Human Services shows that privately insured young adults ages 19 to 25 were particularly vulnerable to losing private insurance coverage prior to the Affordable Care Act.  Young adults are among those who will most benefit from provisions in the Affordable Care Act designed to help people get and keep affordable health insurance coverage.

This Research Brief is available on the Internet at:http://aspe.hhs.gov/health/reports/2012/UninsuredYoungAdults/rb.shtml

New analysis from the Department of Health and Human Services shows that privately insured young adults ages 19 to 25 were over twice as likely as older adults to lose private insurance coverage prior to the Affordable Care Act.  This follows other analyses that show that young adults are among those who will most benefit from provisions in the Affordable Care Act designed to help people get and keep affordable health insurance coverage.  We previously estimated that 2.5 million more people were insured in June 2011 than were insured in September 2010.[1]  This analysis suggests that the new health care law will help young adults keep as well as gain insurance.

Prior to the passage of the Affordable Care Act, young adults were much more likely than others to be uninsured.[2]  However, even young adults with private health insurance were at high risk of becoming uninsured.  Some young adults lost coverage when they became too old to qualify as a dependent on their parents policy, others lost coverage as they moved between employment and school, and others as they changed jobs.  Previous research has documented the risk to the general population of becoming uninsured.[3]  Our research focuses on young adults because they are more likely to experience the types of life transitions that, prior to the Affordable Care Act, often resulted in a loss of insurance coverage.

Under the Affordable Care Act, young adults are now able to maintain their dependent coverage up to age 26 even if they move away from their parents or graduate from school.  This policy took effect for insurance plan renewals beginning on September 23, 2010.  Starting in 2014, there will be even more health coverage options available to young adults when the Affordable Insurance Exchanges, premium tax credits, and Medicaid expansion all begin.

To determine the risk of becoming uninsured prior to the enactment of the insurance security and portability provisions in the Affordable Care Act, ASPE analyzed data from the Survey of Income and Program Participation (SIPP), a nationally representative survey conducted by the Census Bureau, which follows individuals for several years.  ASPEs analysis focused on adults who entered the survey in 2008 with private health insurance (either employer-sponsored or individually purchased) and followed them for two years to calculate their risk of becoming uninsured for at least one month.[4]

Furthermore, insurance loss was most common among young adults with lower incomes.  The average young adult experiencing a loss of private insurance had a family income of 230% of the federal poverty level, compared to an average of 360% of poverty among those without a loss of coverage.[5]  This suggests that many young adults who lose coverage are especially vulnerable to access barriers and to incurring medical debt if they become sick or injured.

The increased options in the Affordable Care Act will enable these young adults to maintain coverage, protecting both their health and financial security. 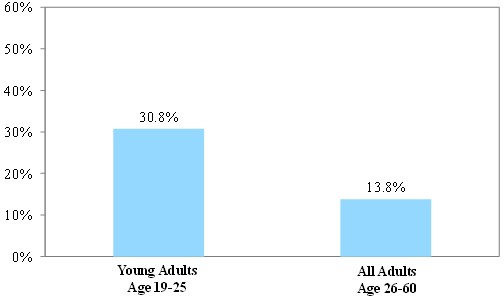 Note: Results show the risk of being uninsured for at least one month over a two-year period among individuals who initially had private insurance.Source: ASPE analysis of the 2008 Survey of Income and Program Participation.

[1]  Sommers BD and Schwartz K, 2.5 Million Young Adults Again Health Insurance Due to the Affordable Care Act, ASPE Issue Brief, December 2011.  Note that The Centers for Disease Control and Prevention (CDC) recently released data from National Health Interview Survey through the third quarter of 2011.  These results showed no significant change in the percent of uninsured young adults from the second quarter to the third quarter of 2011.

[5]  The federal poverty guideline for an individual in 2010 was $10,830.  Calculations based on monthly income in the first month of the SIPP survey, within the health insurance unit.