The Affordable Care Act and Adolescents

This ASPE Issue Brief describes provisions in the Affordable Care Act that impact adolescents such as the prohibition on pre-existing conditions denials and expansion of Medicaid coverage. The brief also includes data on the eligible uninsured adolescent population ages 10-19. The brief was developed collaboratively between ASPE and the Office of Adolescent Health.

Over 42 million adolescents (ages 10 to 19) live in the United States, making up roughly 14 percent of all Americans.1  About 9.8 percent of youth ages 12-17 lack health insurance.2  The health care needs of adolescents are different from those of adults and children. Although adolescents are generally healthy, access to health care, preventive care, and health education is important to ensure continued health throughout their lives.3  The behavioral patterns established during the second decade of life help influence not only the current health status of adolescents, but their risk for developing chronic diseases into adulthood. For example, adolescents who are obese are more likely to be obese as adults and are therefore more at risk for adult health problems such as heart disease, type 2 diabetes, stroke, several types of cancer, and osteoarthritis.4  In addition, there are significant disparities in outcomes among racial and ethnic groups for adolescents. In general, adolescents and young adults who are African American, American Indian or Alaska Native, or Latino, especially those who are living in poverty, experience worse outcomes in a variety of areas (obesity, teen pregnancy, tooth decay, and educational achievement) compared to adolescents who are White or who are more economically advantaged.4

An estimated 9.8 percent of adolescents ages 12-17 lack health insurance and 4.7 percent have no usual source of health care.2 Adolescents are worse off than younger children in both respects.5  The Affordable Care Act includes several provisions that are expected to improve health and access to healthcare for adolescents.  An estimated 4.2 million uninsured adolescents ages 10-19 will be eligible to gain health care coverage under the Affordable Care Act beginning January 1, 2014.6 While states have new opportunities to expand Medicaid eligibility for adults (including adolescents ages 19 and older) with income up to 133% of the Federal Poverty Level (FPL), all states must cover children up to age 19 with family incomes below 133% of the FPL through the Medicaid program.7 About 40 percent of these eligible uninsured (U.S. citizens and legal immigrants) adolescents are non-Latino White, 35 percent are Latino, and 16 percent are non-Latino African American (Table 1). An estimated 2.2 million (53 percent) are male and 1.9 million are female, and 776,000 (19 percent) live in rural areas of the United States (data not shown). The estimated share of youth ages 10-19 that are eligible uninsured varies from 2.3 percent in Massachusetts to 17.8 percent in Texas (Figure 1). 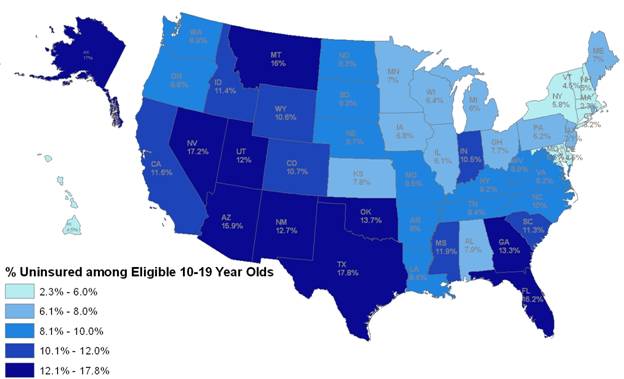 Select Coverage and Benefits Provisions of the Affordable Care Act

The Affordable Care Act includes provisions intended to improve access to health insurance coverage and ensure that such coverage provides essential health benefits for adolescents and young adults. Several of these provisions are already in effect for most plans, including requirements to cover preventive services without cost-sharing, a prohibition on pre-existing condition exclusions for children under age 19, a prohibition of lifetime or restrictive annual limits on essential health benefits, and coverage for dependents ages 19-25 on their parent’s health insurance plan.  Several others, including the opportunity for states to expand Medicaid, coverage of essential health benefits, and the ability to get coverage through the new Health Insurance Marketplace with access to premium tax credits will apply for plan years beginning on or after January 1, 2014. Taken together, these provisions ensure that adolescents will have access to health insurance that covers benefits particularly important for this population.

Preventive Health Services with No Co-Pay

Health promotion, disease prevention, early intervention, and timely treatment of conditions can improve the health status of adolescents and reduce the incidence of chronic conditions in adulthood.  The Affordable Care Act (adding new Section 2713 to the Public Health Service Act) seeks to make prevention affordable by requiring most private health insurance plans to cover recommended preventive services without cost-sharing, meaning not subject to deductibles or co-pays/coinsurance. The Affordable Care Act identified specific sources for these recommendations for preventive services, including the United States Preventive Services Task Force’s recommendations with an “A” or “B” rating,  the Advisory Committee on Immunization Practices, and guidelines supported by the Health Resources and Services Administration (such as Bright Futures for children and adolescents and the guidelines for women’s clinical preventive services).  Recommended preventive services and screenings are now covered with no out-of-pocket costs, including immunizations, behavioral assessments for adolescents, obesity screening, FDA-approved contraception and patient education counseling, and sexually transmitted infection (STI) prevention counseling and screening for sexually active adolescents.  In a national survey, about ten percent of youth ages 12-17 reported any illicit drug use in the past month and eight percent reported cigarette use in the past month.8  An estimated 31 percent of children ages 10-17 are overweight or obese.9   Teenagers are more likely to have an unintended pregnancy than older females.  Among women ages 19 and younger, more than 4 out of 5 pregnancies are unintended.10

As of September 23, 2010, the Affordable Care Act (adding new Section 2714 to the Public Health Service Act) and its implementing regulations provide that new or renewing plans in the individual and group markets are required to cover dependents ages 25 and younger if they offer dependent coverage. This applies to young adults even if they are married, not living with their parent and/or not financially dependent on their parent. Grandfathered group health plans may exclude coverage of a dependent that has access to eligible employer-sponsored coverage. As of December 2011, 3.1 million young adults (ages 19-25) had gained coverage under this provision.11

For plan or policy years beginning on or after January 1, 2014, non-grandfathered individual and small group market insurance plans must cover benefits in ten categories of services and items included in the definition of essential health benefits (EHBs).  The ten categories include: ambulatory patient services; emergency services; hospitalization; maternity and newborn care; mental health and substance use disorder services, including behavioral health treatment; prescription drugs; rehabilitative and habilitative services and devices; laboratory services; preventive and wellness services and chronic disease management; and pediatric services, including oral and vision care (Section 1302 of the Affordable Care Act and Section 2707(a) of the Public Health Service Act).  In addition, the Affordable Care Act prohibits annual and lifetime limits on coverage of essential health benefits.

The Health Insurance Marketplace will provide a new, simplified mechanism to obtain coverage in the individual market beginning in 2014. Families with household incomes between 100 to 400% of the Federal Poverty Level (FPL) who are not eligible for Medicaid or CHIP may qualify for new tax credits to make premiums more affordable. In addition, any plan available to adults must be available for child-only enrollment for children under the age of 21. Open enrollment begins on October 1, 2013 for coverage as soon as January 1, 2014.

In addition to coverage and benefit provisions, the Affordable Care Act includes several other provisions aimed at improving health and healthcare access among adolescents. These include funding for school-based health centers, teen pregnancy prevention programs, home visiting programs, a childhood obesity demonstration project, and the expansion of community health centers.

School-based health centers provide medical care, mental health services, and oral health care and / or preventive services through nearly 2,000 schools nationally.13 The Affordable Care Act (Section 4101) appropriated funds to school-based health centers to address capital needs. Through this grant program, the Department of Health and Human Services (HHS) provided $200 million in 2010-2013 for construction, renovation, and equipment. By December 2012, a cumulative total of 520 awards were made in 47 states, the District of Columbia, and Puerto Rico. Information is available at http://www.hrsa.gov/ourstories/schoolhealthcenters/.

The Affordable Care Act (Section 2951) created the MIECHV program which seeks to support families, including those of adolescent mothers, and improve outcomes for children through home visiting programs. Administered by the Maternal and Child Health Bureau at the Health Resources Services Administration (HRSA), the program facilitates collaboration and partnership at the federal, state, and community levels to improve health and development outcomes for at-risk children through evidence-based home visiting programs. Families voluntarily choose to participate in the program which seeks to improve maternal and child health, child health and development, parenting skills, school readiness, family economic self-sufficiency, and coordinated referrals for other community resources and supports. As of March 2013, awards have been made to support programs in 53 states and territories. Information is available at: http://mchb.hrsa.gov/programs/homevisiting/.

This demonstration project , supported by the Affordable Care Act (Section 4306), aims  to address childhood obesity, which has both immediate and long term effects including diabetes, heart disease risk factors, and obesity as an adult.4  Based on 2007-2008 data, an estimated 10 percent of children ages 2-5 were obese and about 20 percent of children ages 6-11 were obese.15  Administered by the Centers for Disease Control and Prevention, the project targets children ages 2-12.  The program targets children covered by CHIP.  Information on the project is available at: http://www.cdc.gov/obesity/childhood/researchproject.html.

To help adolescents and adults without access to a usual source of care, the Affordable Care Act (Section 10503) invests in Health Centers.  Approximately $11 billion was appropriated over 5 years for operation, expansion, and construction of health centers throughout the nation. About $9.5 billion was provided to (1) Support ongoing health center operations; (2) Create new health center  sites in medically underserved areas; and (3) Expand preventive/ primary health care services.  By the end of this fiscal year, approximately $5 billion in Affordable Care Act resources will have been invested in health centers. Information on locations of health centers is available at: http://www.healthcare.gov/using-insurance/low-cost-care/community-health-centers/index.html.

6 ASPE tabulations from the CY 2011 ACS Public Use Microdata Sample were adjusted to exclude estimated undocumented persons based on imputations of immigrant legal status in ASPE's TRIM3 microsimulation model. Includes currently eligible but not enrolled and those newly eligible in 2014.

7 Section 2002 provides for an income disregard of 5 percent of Federal Poverty Guidelines, raising the effective income limit to 138 percent.

9 Based on parental reporting. National Survey of Children’s Health, 2011-2012. Accessed August 2013 at: http://www.childhealthdata.org/browse/survey

12 SAMHSA, Center for Behavioral Health Statistics and Quality, National Survey on Drug Use and Health, 2010 and 2011. Accessed August 2013 at: http://www.samhsa.gov/data/NSDUH/2k11State/NSDUHsaeCountTabs2011.htm

16 Other than Grandfathered Plans.

17 Other than grandfathered individual market policies.

18 Other than for grandfathered plans, which may be subject to pre-ACA guaranteed issue requirements.

19 Non-grandfathered insurance plans in the individual and small group markets for plan or policy years beginning on or after January 1, 2014.